1850 – Schools built in Dubuque were one story brick buildings. Each building would hold 80 students. After the buildings were almost completed, there wasn’t any money left to finish, and the schools were sold.

1855 – The city of Dubuque became a permanent school district.

1856 – Jobs were given to teachers scoring the hightest on the exams and teachers had to take a yearly examination in order to keep their job.

1859 – The district got into huge financial trouble, thus, only primary and grammar schools were operating. All high schools were closed. Teachers worked for half their normal salary. School facilities were proving inadequate for the large classes, so the school board decided that no child under the age of six was to be enrolled in the schools.

1861 – During the 1861-1862 school year, all the schools were closed for the first term because the district could not pay the bills. The schools were opened again in January of 1862.

1865 – A two-acre plot of land was purchased to build the new Fourth Ward School.

1866 – Plans for the Fourth Ward School, which later became Lincoln School, were approved, and the 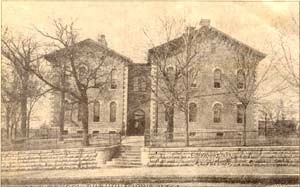 building was projected to cost $12,068. During the construction, the contractor discovered he could not pay for the labor and the materials, so the School Board paid for them instead. It was then discovered that the walls were four feet too low, thus, the cornice would cover part of the windows of the top story. To remedy this problem, it was decided to raise the walls at a cost of $525.

1867 – The new school building, Fourth Ward School, was opened to the public on February 11, 1867. The cost of the building alone was $14,556. The cost of teachers and superintendents was $623 and the cost of furniture was $2,012, for a grand total of $17,192! It was considered a very elaborate and well outfitted school for its day. The first principal of the new Fourth Ward School was Thomas M. Irish, a respected teacher from Iowa City. Additional rooms were finished and put in use in the Fourth Ward School because of the large number of students. The students and teachers bought an organ and presented it to the school.

1872 – On April 26th the roof of the Fourth Ward School was horribly damaged by a large storm. The Daily Herald published an article accusing the principal of the Fourth Ward School of punishing a student in an extremely cruel and inhuman manner. After an investigation, the accusation was proven false. On June 16th, all the students were dismissed to allow the students and teachers to join in Pope Pius IX’s celebration.

1875 – The German language was taught in all of Dubuque’s public schools and a fifteen minute morning and afternoon recess was established.

1876 – Many black children enrolled in all the Ward schools. They were denied admission. On February 14, all the pupils withdrew from the “colored” school, and it was closed.

1881 – All principals were told to exclude any student who had not received a certificate of vaccination on or before November 28th.

1886 – Plans were submitted by F.D. Hyde for an addition to the Fourth Ward School. Plans were 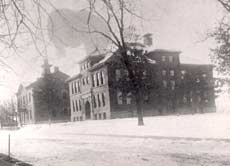 1887 – The main building was so crowded, Lincoln students only attended for half days during construction of the new school.

1890 – Hyde Clark Post #78 asked the School Board to fly the American Flag on all the days school was in session.

1892 – On March 11th, Irving School was destoyed by a fire, and arrangements were made for Irving pupils to go to Lincoln School. A mining company had permission to mine for lead under Lincoln School for two years. The 400th anniversary of the discovery of America was celebrated in public schools by having patriotic exercises on October 20th and dismissing school on October 21st.

1894 – During this year Kindergarten classes were started for the first time in public schools.

1896 – Lincoln School held an entertainment program to raise money for the library. Admission was 10 and 15 cents. 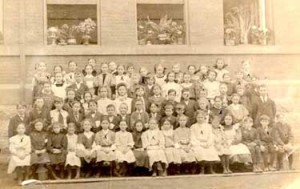 1908 – The Palmer Method of handwriting was introduced in all schools.

1910 – On September 7th the School Board voted to put in a park and playground on the Lincoln School grounds. The first fire drills were started in the schools.

1920 – Parents and teachers had a meeting to establish the first parent/teacher organization at Lincoln.

1922 – The district ruled that married women could not teach. 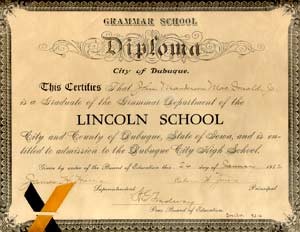 1923 – On July 10th the new Lincoln playground was officially opened.

1925 – Grade levels were combined because of overcrowding. The girls wore dresses, never jeans or slacks.

1932 – A resolution was adopted to limit the age of employees to 67 years old.

1938 – A bond election was held in the amount of $420,000 for the purpose of erecting four new schoolhouses. The contract for excavation of the new building was awarded to Thomas Flynn coal Co. for $648.00. The girls wore pretty dresses, never jeans or slacks! Lincoln had a playground but no equipment. 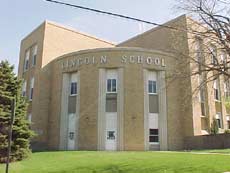 1941 – During the 1941-1942 school year, the district made it compulsory for all teachers to attend summer school to further their studies. The teachers had to get 6 hours of summer school credit every 6 years.

1943 – All of the school openings were delayed for one month because of a polio epidemic.

1949 – The opening of school was delayed one week because of an outbreak of poliomyelitis and a shortage of coal due to the mining strike.

1953 – 3rd and 4th graders, with parents’ permission, were released from school one hour a week to attend religious instruction.

1963 – Lincoln was overcrowded thus, four double-wide trailers were used as classrooms and placed on the playground.

1969 – Funds were made available under a grant from the Non-Food Assistance Act to purchase equipment in order to expand the food service program to Fulton and Lincoln. 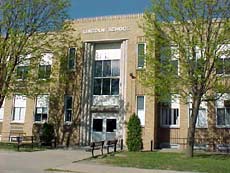 1991 – PALS (Lincoln’s parent group) donated around $20,000 for the playground equipment Lincoln School currently has, which was installed over a 5-year period.

1993 – Expeditionary Learning is initiated at Lincoln School. The Lincoln library was remodeled to its present state and the mural was painted on the walls by Mrs. Arthur C. Whalen a year later.

1998 – The Telephone Pioneers painted the map of the United States on the playground during the summer. Reading Recovery was started for 1st and 2nd grade.